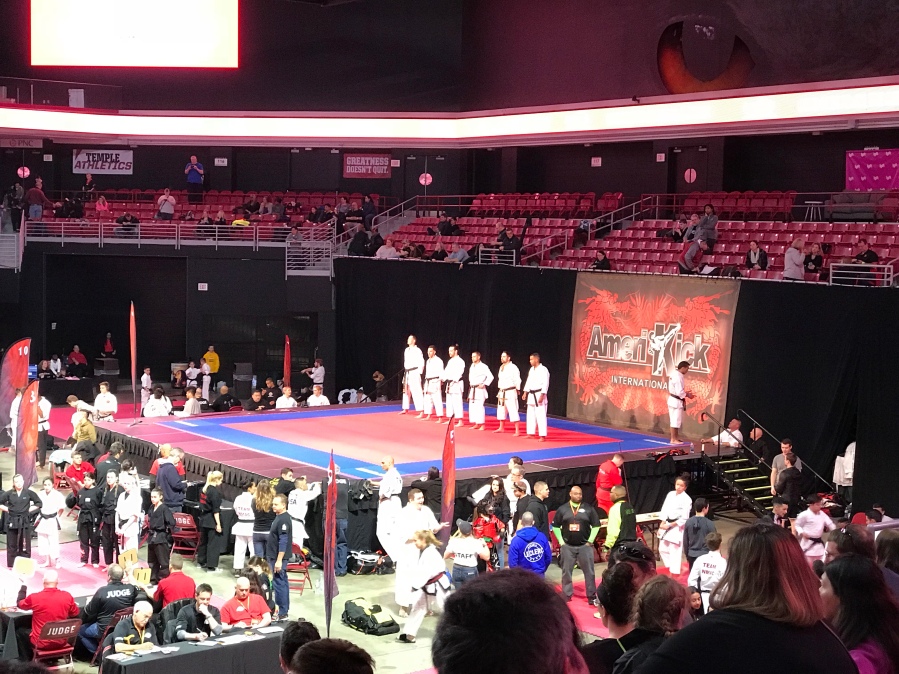 It was the first NASKA event I had been to in a while. Between honeymoon, black belt tests, working, taking over a business, and graduate school, getting annoyingly sick, and generally running all over the great state of Wisconsin with a grin and a lot of coffee there’s been more than a little going on. But, it sure was great to get out there and compete on stage again.

Actually, it’s just nice to know that I can still do karate at something resembling a decent level. It’s been a thought that has been reinforced throughout the last few months. Tournament season started in as official a manner as it ever does and I’ve managed to make it to a few local ones and one big one. Throughout all of them, I’ve been working, tweaking, and generally hoping for better.

Last week I was at Sharkey’s Karate Studio training and after running through everything and getting to the point where I wanted to die, and Sensei kept jokingly asking me if he was going to need the defibrillator, we got to talking about my plans for the upcoming season. They weren’t anything much. Generally do better, maybe end up ranking a bit higher in the NASKA rankings. Which is a fun dream to have, but I can’t make all the events, so it becomes a little creative at times.

But most importantly, I’m having fun. I’m talking to people I respect and admire and slowly, ever so slowly, I might even be learning a few things and forever expanding my network of amazing people I happen to know.

This year has also been something of a reality check. Back in February, I hit 20 years in the martial arts. I started Tae Kwon Do when I had just turned nine. There were some issues with me getting suspended from school and generally making all of my teachers’ lives completely miserable. My father, in a stroke of inspiration, decided I should maybe have something more productive to funnel all the anger and energy and I was enrolled in Chay’s Tae Kwon Do. This is a whole story for another time. But, it was how I started. And now, here I am.

It hit me as I was teaching a Basic class a while ago. We have a lot of kiddos who want to kick as high as they can, I’ve been stressing technique and patience. Because, I asked them, how long have you guys been doing karate? Most of the answers were around 3 months, 4 weeks, one kid who’s been here forever shouted “Three years!!” Which is true, and I gave him his due. But then I brought up the concept that kicking high happens with practice. Lots of practice. We need the strong basics to make sure the technique is correct and safe, then as you move along, you’ll eventually be kicking at the moon. Somewhere in this conversation, I mentioned I’d been doing karate for 20 years. That’s a number big enough that most kids brush it off as forever and it hit me then at exactly how long that is. That’s almost as long as I’ve been able to tie my shoes reliably.

Fast forward a few weeks and I’m having a conversation with a wonderful gentleman who mentions “I wish I would have started this sooner. I would have gotten so much more out of it.”

Okay. This is one of those statements I hear a lot. From everyone I meet, it seems. Here’s my pitch on it. Martial Arts doesn’t have a “season” or a prime period for training like other sports. In a lot of the sports and recreation that we all love, hitting your thirties is seen as something of a death knell. Martial Art’s doesn’t have that problem. Whenever you start, that’s the best time. Ideally, the perfect time would have been twenty years ago, but until time travel is invented, we’re stuck with the now. So start. Benefits are there to be had, knowledge is always available, and age has no role in those two things.

Taking advantage of the options available to you is something that I believe in heartily. And something I try to live by as much as possible. It can make life a little chaotic, but also so very rewarding. So, take that karate class, compete in that tournament, ask that person out for coffee, write the story, go on the adventure, and jump in with both feet. Because, before you know it, it’ll be twenty years later and you’ll be wondering how on earth that happened.