Two years ago I moved from Ashland, WI to Milwaukee.

Over that summer I had been doing some contract work for the DNR. I was removing invasive species and planting native trees along the shoreline of Lake Superior. It was good work. I was outside all the time, and usually got to see some pretty cool things. I even broke a shovel. Something I was pretty proud of.

Ashland and the surrounding area were beautiful, I got to hang out in it all the time. And there was always something to do. Even if you sometimes had to look pretty hard. 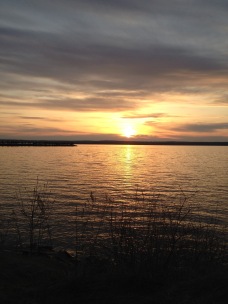 Sunset beers on the lake

However, there were several mitigating factors. Namely, a crazy ex lived in Ashland and I had an extreme motivation to leave and go as far away as possible. That plus the fact that I couldn’t seem to find a job that would allow me to keep my sanity, and the clinging feeling that I was stagnant in this place I loved so much all culminated into my decision to leave.

During the prior spring I had a job as a special education teacher in a local high school. It was a good place, the people there were interesting, and it paid great. But, I was just burned out. I had worked in a mental health and rehab center for a year and a half before becoming a special education teacher. And though the issues I dealt with in the high school were far less severe, they were also no walk in the park. I finished out the school year and realized that I needed a break from working with kids.

So I started applying for full time jobs, without much success, all over the country. There was almost a job in Texas. I sent a resume to California. I sent resumes to Toronto, and New York City. I even called a place in Maine that said they were hiring karate instructors.

They were hoping for a local person.

I sent around 15 or 20 applications to Minnesota and another 15 or 20 to various places in Wisconsin.

I never sent much too far south for the simple reason of I didn’t want to live there. I wanted to stay in the woods with the bears. But, eventually, as June moved into July, and July started approaching August. I did the resposible thing. I started hitting up Milwuakee and Madison.

Through all of these applications, I was going for anything that I might have been remotely good at, that wasn’t mental health. Which had been all of my job experience for the last several years. I applied to be a Security Advisor. There was a job in Minneapolis that was sort of vague, but had something to do with healthcare. I applied to be a content writer, a blogger, a secretary, an admissions counselor….

The list went on and on. After a month of no luck, I recanted my position from “needing a break from kids” to “needing a break from these kids” and started sending out applications to various school districts in the midwest. I was both pleased and irritated to find most of their positions had already filled with happy and contented teachers who were excited to start. It meant I didn’t have to work with kids, but it also meant I didn’t have a job.

At one point, I found myself on the phone, talking to a guy about being a boat detailer.

That was a bad day.

Nearing the end of July, I volunteered to help throw a fundraiser for my college. My roomate worked in some sort of advisory position, and mentioned there would be free food if I helped with the event.

It was pretty easy, we hung out at a golf course and chatted about whatever we wanted, and then tried to sell raffle tickets when people wandered by.

After a few hours of this I recieved a phone call from one of the many applications I had sent out. After a brief conversation I discovered I had an interview at a middle school!

One thought on “How to Own a Dojo: Step 1 – Burning Need for Change”

Dino Nuggets and Star Wars. 32 is looking a lot like 12 today. 🦖 🦕
This encapsulates my day.
New post!
#mood
So, ring lights are cool.
The Happiest of New Years to all! Let’s greet the new year with a little style! (Not pictured 🤣)
It’s been a landmark of a year, but to all my friends, family, and those wonderful individuals who are one and the same, have a wonderful holiday with food and love. Merry Sithmas to all 😂
As years go, this one has been a doozy. I have so much to be thankful for. The amazing people I work with, the incredible families that make BBLA the place it is, and all of the friends and family who have reached out over the last 10 months. It’s been a year of incredible highs and ridiculous lows. There’s been midnight wanders, 2am conversations, and early morning hikes (sometimes in the same day!).
New Post! New Post!
Happy Friday!
Last one from Cali.
We both digging the cooler temps!
Follow Kata Nerd on WordPress.com