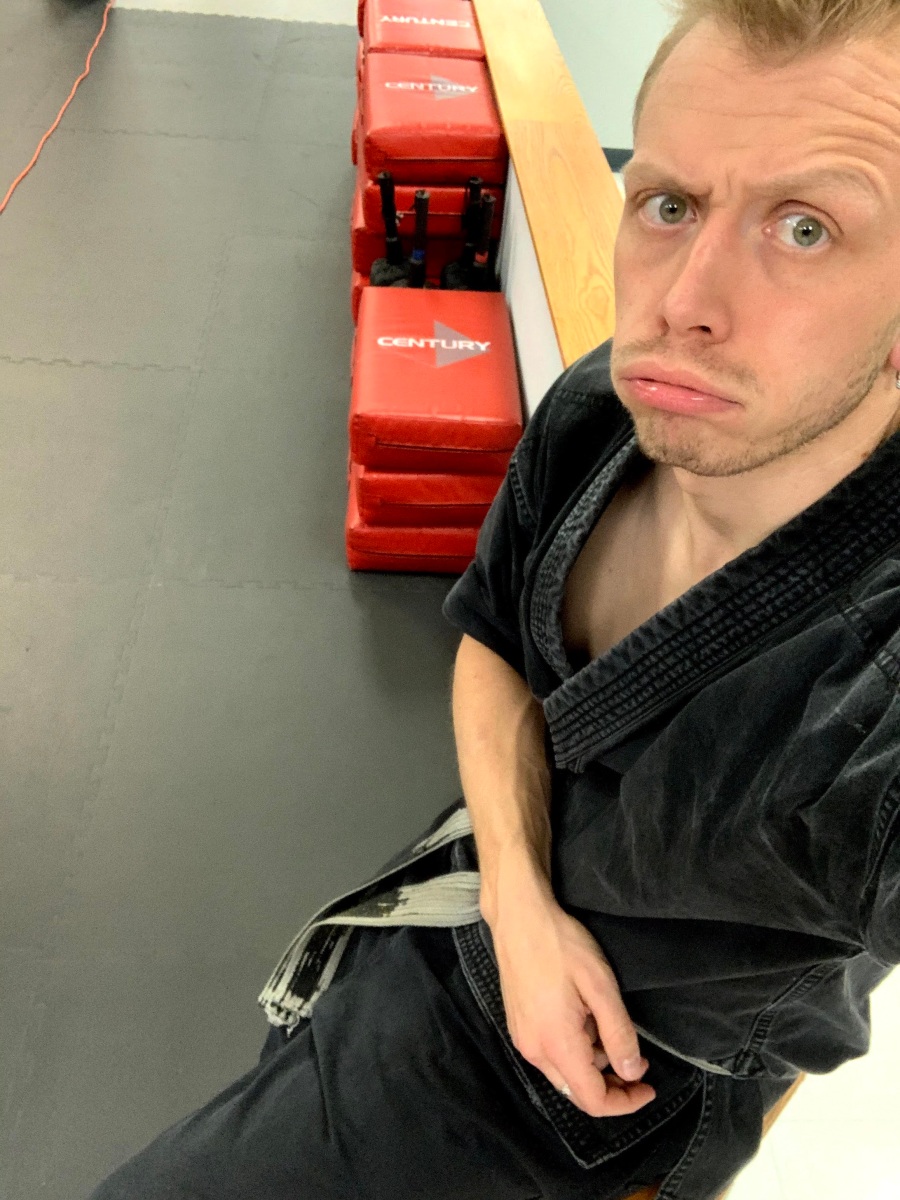 It’s been some time since I got to get back to this, and let me tell you. It’s been a hell of a few months! But, parts of that will be covered in 2 (Adventures). 1 (Day). Which is coming up. In the meantime, read about just a sliver of the incredibly stupid things I’ve done in the past.

It’s a physical mark of being awesome, or having something removed, or of the especially poor decision made in the heat of the moment. There are some great definitions out there, and an earlier draft of this post had a link to the Webster definition. Suffice it to say, most of my scars are from: A. My Cat. B. Something idiotic I did, usually in the martial arts or fitness world. C. Occasionally remembering knives are STILL sharp.

If you look at my left thumb, there is a rung there. There has been a ring there for 14 years.

That’s a lot of years.

If you remove the ring (no mean feat) you will see that I have this comically skinny thumb that has adapted to said ring. It’s like the guys that always skip leg day or those chef knives that have been sharpened so much they’re a sliver of what they were (I like one of these analogies very much more than the other, I’ll let you decide which is which).

I bought that ring in a small town in Spain during my first international competition in Portugal. We were on a day trip and all I remember was a rainy day, clay roofs, and mountains all swirling together into this basement jewelry shop where I found a silver ring that I could wear on my thumb.

This was the tournament Sensei Harris walked a few miles with me in the cold and dark to talk about belief and purpose. A conversation, by the way, which has influenced every choice I’ve made since.

This was the trip where I won my first world title.

This was the trip where my mom showed up in the middle (hi Mom!)

And this is also the trip where I watched a bunch of Russians sing Hotel California in a late night café with verve and passion while gleefully duetting the jukebox with all the Americans and getting heckled by the Italians.

This was a trip that, in a lot of ways, changed my life.

So when I look at that thumb, in all of its misshapen glory, I can’t help but to smile, because that was a launching point of my competitive career, a turning point in how I move through my world, and I wouldn’t be in the place I am now without it.

Before we really get into this story, I should mention that I refer to the Power Pinkie as my PP. And I have several friends who find this hilarious, and then the entire rest of the world reminds me that I own a business and should be above such things.

When I was in college I started working out and sparring with a few friends at the local fitness center. It was a special thrill to dodge a side kick and have it slam into the Racquet ball court wall with a resounding boom that made people poke their heads around the corner to see if everyone was ok. Usually we were. Sometimes one of us was not.

This is also a story on why i now wear close fingered gloves. I was trying to slip a side kick on a cold Tuesday morning and as I moved, Britt’s heel caught my pinkie and turned it 90 degrees sideways.

I’m not sure how familiar you are with general finger mechanics. But sideways is a direction they most definitely do NOT like to go.

I took a moment.

And another moment, just to make sure I fully appreciated the moment I’d just had.

Then I shook it out and jumped back in the ring, I remember looking at Britt with a grin and saying “it burns like FIRE.”

We sparred for another half an hour, I was a bit skittish, and then we went home. I, in true 20 year old style, did nothing to take care of it other than complain. However, the doozy comes about two weeks later when I DID IT AGAIN.

This one took some more moments to shake off and I think I again jumped back in the ring, but then the digit swelled up and I couldn’t bend my finger and it was all sorts of interesting colors. It should be mentioned that Joe had also punched my in the eye with some MMA training gloves and I had the beginnings of a black-eye starting as well.

It had not been my best day.

However, this gets better. I was set to fly to Spain for a week with my family and I met them at the airport the VERY NEXT DAY with a purple finger, a black eye, and a big grin.

My father, a physician, completely ignored the black eye except to comment “keep your hands up” and then proceeded to take a look at the finger. I don’t know how many of you have parents who are or were physicians, but it’s a wholly different medical experience than what you receive anywhere else. My Dad proceeded to grab my hand and look at the colorful finger for a few moments. Then, with no warning pulled on it.

I yelped loud enough in the middle of O’Hare that people walking past paused a moment to see what was going on.

He stared at me for a beat and then asked. “Did that hurt?” Without waiting for a reply, he then took my finger through a few manipulations, prompting me to yelp several more times and do a very spirited and heartfelt dance which he completely ignored while cranking on the purple pinkie but which my 6 year old sister thought was ABSOLUTELY HILARIOUS.

Nothing make you question a few life choices than swinging on a high bar, attempting kip hard enough to drive your entire body up into the air as you pull on that bar like it’s the very-most important thing in the world and hoping to:

a) arrive safely on top of the bar and survey the domain.

b) not drive your face into a piece of steel literally as hard as you can and fall to the earth amidst tears, blood, and enamel.

However, there is ONE thing that can up the ante. Imagine, as you swing, pull the hips back and start to pull through your shoulders and upper back, your left clavicle makes a cracking noise that sort of sounds like a dry cork being pulled out of a wine bottle and breaking halfway through. Disconcerting at best and downright alarming at literally any other time.

This time, my physician father was hundreds of miles away, but I have a friend who is also a PT. When I explained the noise, general things I was doing, and the fact that wearing a seatbelt was weirdly painful, she just laughed. “You popped it!”

I found out later this was NOT a great thing and I know have a funny bump on my clavicle because it has partially separated from my body.

It also made it awfully hard to compete and or teach for many, many months.

But, with the aid of incredible amounts of all osrts of tape, a daily allotment of ibuprofen, some great help from friends, and the type of bullheadedness I’ve refined over two decades of martial arts, I got back to competiting and feeling pretty good just in time for Covid Lockdown.

But, that’s a story for another time.

Coffee-Cat
It’s happening TOMORROW!
Well, that’s a result!
What is this…coolness in the air?
New post!
Midday snuggles.
This past week was a blur of awesome, relaxation, and some pretty impressive heat indexes. I couldn’t have asked for better food, more incredible people, or a more relaxing week. Idaho, you were beautiful.
Battle of Atlanta, you were incredible.
Well, that’s a result. Now back to work on cleaning everything up.
Happy Thursday!
Luxuriatin’
And done!
Follow Kata Nerd on WordPress.com