Diamonds is one of those pivotal tournaments for me. Every year, something happens that makes everything else a little different. In this case, we have Team AKA, Sport Martial Arts, Competition, and a whole lot of thanks.

But, before we get too far into it, there are some steps we need to go through first. In the time since last week, a whole bunch of everything has happened at a remarkably consistent rate that makes me approach flat out panic pretty regularly.

One: Miss Morgan Plowden came down and did a sparring seminar at our dojo! For those of you that may not know, Miss Plowden is one of the top rated fighters in the world. So, it was quite exciting to have her come and show our kiddos, and adults a few tricks and ideas.

Two: I contracted the plague and was a walking zombie for however long it has been since last Saturday. Ten days?

Three: I was in Chicago on Tuesday for a training (with plague and all) and something very exciting happened.

Over the last month or two I’ve been driving down to Chicago and training with Sensei Sharkey on a somewhat regular basis. There was some discussion between us and it became very important for me to make a phone call. As I have stated in previous posts, I have been a part of Team Revolution for years. Sensei Sharkey had offered me a new chance that gave me a series of different opportunities. But before I was going to take any steps, I wanted to talk to Mr. Loveless.

And I did. We had a phone call and I explained there were some personal opportunities that had come up, and I was going to have to step away from Team Revolution. Mr. Loveless congratulated me, and we ended the call on good terms. So, I am proud to say that I am now a member of Team AKA. It’s a big step for me, and one that will give me a number of opportunities that wouldn’t have been available otherwise.

I truly appreciate and treasure my experiences with Team Revolution, it’s a great crew of people and I’ll be sad to no longer be a part of all of the wacky adventures.

Four: I was in Oshkosh on Wednesday, and traded cars with my dad, I have one of the recalled diesels from Volkswagen, and it will now reside in my parents’ driveway until it is sold back to the company. Now I drive a van! Then the plague super kicked my ass and I was sent home from work early on Wednesday night….

Five: Thursday I had a meeting with my Getting Stamped Internship and we had some great discussions about what I’ll be moving into in my internship and a whole slew of new ideas. It was very exciting, and a pretty motivating experience that will hopefully help my little blog.

Six: Friday morning we all left for Diamond Nationals.

Rewinding a few steps, with my Team AKA invitation squared away with Sensei Sharkey, and everything talked out with Mr. Loveless, it was discussed that my “debut” would be at the Diamond Nationals. I would compete wearing their logo and be introduced to the team after the nighttime finals on Saturday.

The minute I stepped in the hotel on Friday afternoon, I was helping out Sport Martial Arts and running a camera, which involved a pretty humorous exchange where I had to be escorted around the tournament for a period of time. However, I was then given this pass! 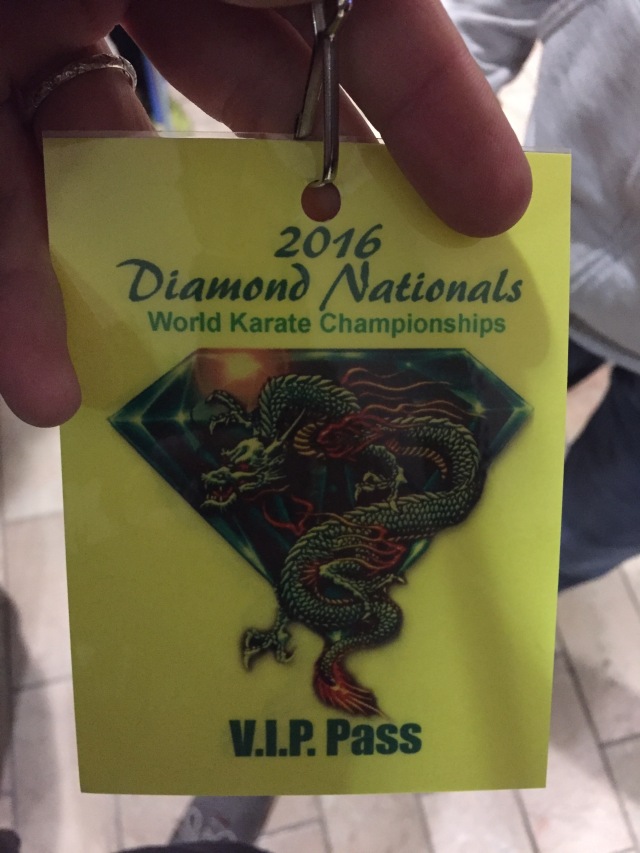 Though, I was told in my case the VIP just stood for “Very Important Pass.”

After being given the task of escorting my pass and showing it the sights, I was given a camera and started wandering and taking photos.

I was called back and put on a video camera to record the extreme, musical, and creative divisions on stage.

It was only later that I discovered all of this was being Live Streamed. It probably pays to mention it was my first time ever running a video camera. There was a definite learning curve from beginning to end. Apologies to anyone watching and wondering what the hell was going on, that would be me.

Four or so hours after I stepped foot in the hotel, Friday night events were done, and I was free-ish for the remainder of the evening.

I’ve been doing Diamonds for a number of years, and every year I learn something new. When I got down to the competition floor on Saturday morning, the room was a wall of noise and the energy level on the building was off the charts. It’s a wonderful thing to experience. Two of our students were also competing and they did a great job! They did a terrific job representing the school and themselves. Plus, they both had a great attitude and seemed to have at least a little bit of fun!

I competed in three divisions. Japanese/Okinawan Kata, Traditional Korean Form, and Traditional Non-Bladed Weapons. My forms felt strong, and I really felt I pushed them to a new place. The training with Sensei Sharkey and the work I’d been doing was starting to pay off. I was a finalist in Korean and Weapons, which means I finished in the top eight competitors. Throughout every division, and the entire day, I had members of team AKA coming up and introducing themselves, congratulating me, and really making me feel welcome. It was a humbling, and wonderful experience to have, and I’m sincerely grateful to become a part of such a great community.

The nighttime finals were great, as normal, and the introduction to Team AKA was a great experience that really drove home the family nature of the team. Thank you, again.

I’ve been competing in martial arts since I was nine years old. I grew up at tournaments and did my very first one after being in Tae Kwon Do for all of a month or two. That’s close to 19 years, hundreds of thousands of miles, more dollars than I want to think about, a handful of countries, and more time spent pushing myself to physical limits than is probably really healthy for me.

However, I really do love what I do. Not because it’s something that I manage to do decently at, but because it has put me in contact with hundreds of truly wonderful, passionate, and incredibly quirky people who all share my same obsession. Diamonds is a phenomenal place to go, and learn, and watch some of the best in the world strut their stuff. But this year it was also a very personal experience. Strangers came up to me and welcomed me to their family. Friends from Missouri, Florida, and California joked and laughed with me. And we all supported each other in our goals and hopes. The thing I truly love about martial arts competition is your biggest fans are also your fiercest competition. Everyone wants to see the best form, fight, or trick humanely possible, and we just hope today is the day WE manage to pull it off.

To all the wonderful people that make Diamonds such a special experience, thank you and see you next year!

On a totally unrelated note, I’ll be having a review on the tournament out in Sport Martial Arts pretty soon and I got some stuff in the works with Getting Stamped. So, keep the eyes peeled and inboxes open!

And done!
A few days late, but it was a heck of a weekend in Door County with some amazing people! Thanks to random adventures, great humans, and oh so much laughter.
Every now and again, you get a reminder the world is pretty awesome. Happy Monday, everyone!
Dino Nuggets and Star Wars. 32 is looking a lot like 12 today. 🦖 🦕
This encapsulates my day.
New post!
#mood
So, ring lights are cool.
The Happiest of New Years to all! Let’s greet the new year with a little style! (Not pictured 🤣)
It’s been a landmark of a year, but to all my friends, family, and those wonderful individuals who are one and the same, have a wonderful holiday with food and love. Merry Sithmas to all 😂
As years go, this one has been a doozy. I have so much to be thankful for. The amazing people I work with, the incredible families that make BBLA the place it is, and all of the friends and family who have reached out over the last 10 months. It’s been a year of incredible highs and ridiculous lows. There’s been midnight wanders, 2am conversations, and early morning hikes (sometimes in the same day!).
New Post! New Post!
Follow Kata Nerd on WordPress.com